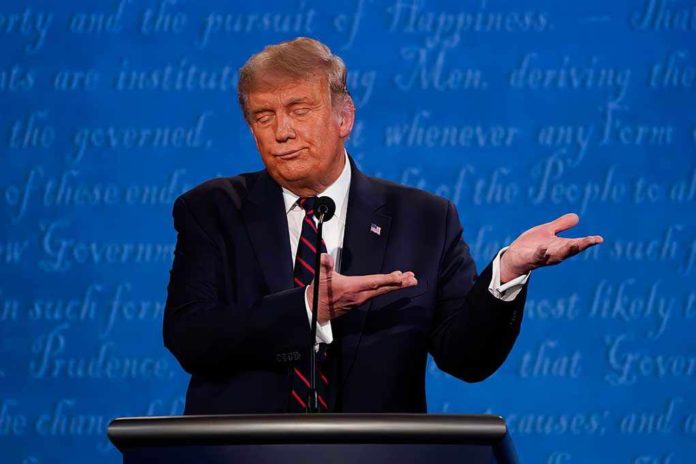 (TheRedWire.com) – When Donald Trump announced his candidacy for president in 2015, he made combatting illegal immigration an emphasis in his platform. He repeatedly stated the US needed to get tougher on border protection. He said numerous times that people who come to America should be here to make the country more prosperous and emphasized immigrants should be contributing to society. In 2018, the Trump administration proposed an income test for those applying to enter the country legally or obtain legal residency.

In addition to building the southern border wall, the former president also implemented the Remain-in-Mexico program. During the 2020 presidential election, then-Democratic presidential nominee Joe Biden said if elected, he would undo Trump’s immigration policies. Since his inauguration in January 2021, immigration encounter numbers have repeatedly broken records. Now, the Biden administration is proposing simplifying citizenship tests. The move prompted Trump to speak out and slam the policy.

On Tuesday, December 27, the former president told Breitbart News he didn’t like the idea of making citizenship tests simpler. He said those who want to become US citizens should go through a process while acknowledging he was completely supportive of legal immigration.

Still, Trump said the policies of the Biden administration led to over 12 million illegal immigrants, not including the impact of drug and human trafficking. The previous commander-in-chief noted he did not support making citizenship easy. Instead, he said it should be “responsible.”

In January 2021, Biden issued an executive order requiring the government to identify barriers preventing immigrants from accessing the legal immigration system and promoting the improvement of the naturalization system. He ordered a “comprehensive review of the process” that includes, among other things, the portion of the citizenship test involving civics and English language tests.

On December 15, the US Citizenship and Immigration Services (USCIS) published a notice in the Federal Register to officially announce plans to conduct a trial of proposed changes to the naturalization test. The move was a direct result of Biden’s executive order. The USCIS noted the test evaluates a prospective citizen’s English skills, knowledge of US history, and the “principles and form of US government.”

The USCIS said it would conduct a trial changing the format of the civics test to a multiple-choice format. In addition, the federal agency is redesigning the non-standardized English-speaking part of the exam to standardize it to ensure prospective citizens “understand words in ordinary usage.”

Trump noted he would do the opposite of Biden if he were in office and would be much tougher on immigration. For one, the 2024 presidential aspirant said he would strengthen the border by finishing the border wall. In light of Biden’s move to change the naturalization process and test, Trump might possibly make the citizen requirements more stringent, considering his criticism of the proposed changes.